The DOG is The GOD in frolic…. Henry Ward Beecher
LABRADOODLE COATS PRODUCED AT DANMAR LABRADOODLES

Our F1 Labradoodle Coat Type “LABRADOR RETRIEVER to POODLE” (NO LONGER BREEDING)
Our Labradoodles, First Generation, also referred to as Labradoodle Origin, F1 Labradoodle, by the International Australian Labradoodle Association, (ALAA) Our F1 Labradoodle is a Labrador Retriever bred to a Standard Poodle, both of champion lines and quality bred. Our F1 Labradoodles coat is typically flat, wavy to wavy fleece, with a flair of hair some places more than others. These will either be low shedding (the courser coats) to non shedding (the really soft fleece feeling coats). A F1 Labradoodle can be both hair types in different parts of the body. Note that some F1 Labradoodles can shed somewhat until 10 months old as the coat is transitioning from puppy coat to adult coat. Many of our litters have also produced the curly coats, from a soft flowy curl to a tight curl (wool) much like the Poodle. Our F1 Labradoodles, First generation are typically low shedding to no shedding dogs and dander free or cause no to mild allergy reactions. Our standard poodle stud has a dominate double champion poodle coat, due to this, our first generation labradoodles have exceptional coats. Example of coats produced in our program here at Danmar Labradoodles can be seen below. Please note this is not a typical F1 Coat. 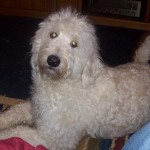 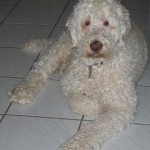 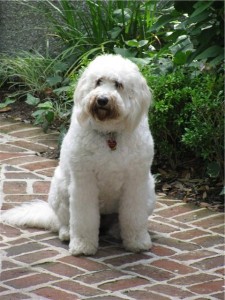 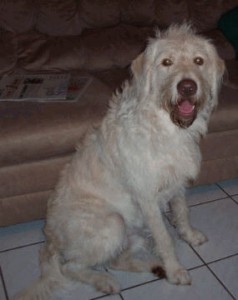 Our F1B Labradoodles Coat Type “LABRADOODLE BACK to THE POODLE” 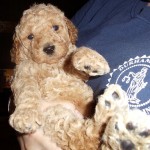 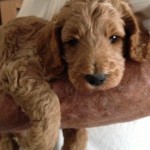 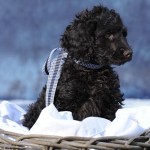 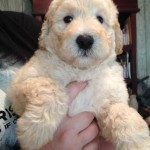 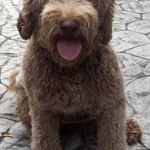 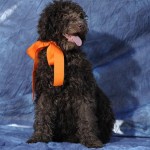 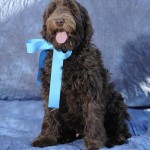 Our Australian Labradoodles used in our breeding program are 3rd-5th generation Labradoodles. They will have a soft wavy fleece coat to a curly wool fleece coat, all non shedding and will be allergy friendly. Examples of some Multigen Labradoodle coats produced here at DML can be seen below. 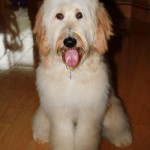 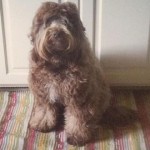 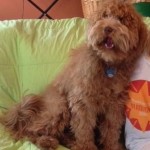 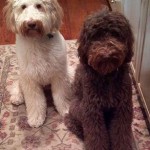 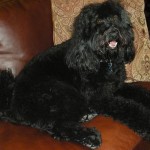 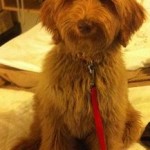 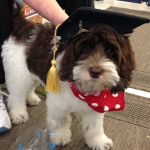 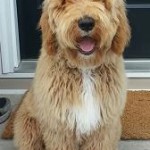 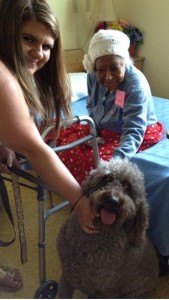 A DOG WAGS ITS TAIL WITH ITS HEART…Martin Buxbaum 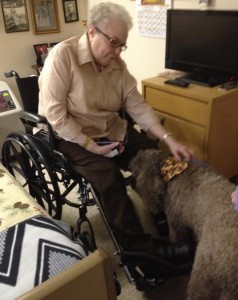 Give LOVE like your PET does. Unconditionally and without question…..

Our Labrador Retrievers are champion quality in all aspects! They are bred from the English stature, shorter and stockier than that of the American Lab and have been selected from top quality show lines. Our Poodles as well were carefully selected from show lines and both females are small Standards and have great conformation. Our First generation; F1 Labradoodles resemble much of the Lab characteristics in conformation.

Our Labradoodle Retrievers are wonderful, fun loving, smart, and playful. They love to retrieve and enjoy all water sports or just playing in the family pool. Many of our Labrador Retrievers used in our breeding program are from show quality champion lines. Our Poodles think they are LABS….they retrieve, they swim and they love hunting and just love unconditionally. They all have an extremely eager to please personality and are usually only inches behind one of us at all times! All are highly intelligent and were easily trained. Our two female Poodles, Tess and Penney come from carefully selected champion show lines as was Bentley….our top stud dog!

Our Labradoodles are very smart, friendly and ready to play. Although they love the outdoors, they share every part of our home and our children’s beds. We have to constantly remind them as well as ourselves, they are not HUMAN! All are great with kids and seniors alike. All our dogs KNOW NO STRANGERS. Many of our Labradoodle puppies produced have gone on to become certified as Therapy Dogs of America. Some are even working in schools as Theraputic Reading Dogs with children having reading disabilities. We have a personal friend with twin Autistic children that have made great accomplishments with their children using one of our Labradoodle pups sold to the family as a way to reach a part of their children never before obtained thru any intervention. (going against the odds projected by their many doctors)

As we let our dogs roam freely in and out of the house, we need to be aware of what we are exposing our pets to. There are various plants that are poisonous to dogs both inside and outside of our homes. Below is a chart of some of the more common plants our dogs may come in contact with. For more on Toxic Plants, Click here.

These plants are probably the most popular holiday plant and are easily recognizable by their large red, white, pink, or mottled leaves. These plants also contain a thick, milky irritant sap. In general, it would take ingestion of a large amount of this plant to see possible clinical signs in your pet. Signs could include vomiting, anorexia and depression. The symptoms are generally self-limiting and treatment is rarely needed. Your Vet may recommend limiting food and water intake for 1 or 2 hours if your pet is suspected of becoming sick after ingestion of poinsettias.

Some members of the Lilly family of plants can result in serious illness in cats. Specifically, Easter Lilies, tiger lilies, Japanese show lilies, rubrum lilies, many lily hybrids and day lilies have been known to cause kidn

Spring is the season where flowers bloom and sunny skies bring beautiful sunshine. Dangers also become a factor as toxic plants are in full bloom, posing risks to our beloved pets. Learn about the different kinds of plants that can harm pets and pose health risks to pets. There are also other dangers your pet faces in and around your home. Stay informed and prepared!

Tulip, hyacinth and daffodil bulbs can damage a dog’s mouth and esophagus, leading to drooling, vomiting, severe diarrhea and even abnormal heart rhythms. Asiatic and Japanese lilies can cause severe kidney failure in cats. One or two leaves can kill them. Be sure to keep bulbs out of reach before planting and surround them with plenty of mulch; supervise your dog when they are outside as a precaution. The following is a list of common spring and summertime plants and the type of dangers they pose.

Peace lily (Spathiphyllum spp)– Ingestion can result in ulcers in the mouth, vomiting and diarrhea.

Morning Glory (Ipomoea spp)– Seeds may cause hallucination, may cause diarrhea.

Tulip, hyacinth and daffodil bulbs can damage a dog’s mouth and esophagus, leading to drooling, vomiting, severe diarrhea and even abnormal heart rhythms. Asiatic and Japanese lilies can cause severe kidney failure in cats. One or two leaves can kill them. Be sure to keep bulbs out of reach before planting and surround them with plenty of mulch; supervise your dog when they are outside as a precaution. The following is a list of common spring and summertime plants and the type of dangers they pose.

CHOCOLATE contains theobromine, a compound that is a cardiac stimulant and a diuretic.

AFTER their dog has eaten a large quantity of chocolate, many dog owners assume their pet is unaffected. However, the signs of sickness may not be seen for several hours, with death following within twenty-four hours. A dog that has ingested a large quantity of chocolate will exhibit symptoms that include staggering, labored breathing, vomiting, diarrhea, abdominal pain, tremors, fever, heart rate increase, arrhythmia, seizures, coma or death.

ONIONS and garlic contain the toxic ingredient thiosulphate. Onions are more of a danger.

THE POISONING in dogs occurs a few days after the pet has eaten the onion. All forms of onion can be a problem including dehydrated onions, raw onions, cooked onions and table scraps containing cooked onions and/or garlic. Left over pizza, Chinese dishes and commercial baby food containing onion, sometimes fed as a supplement to puppies, can cause illness.

WHILE GARLIC also contains the toxic ingredient thiosulphate, it seems that garlic is less toxic and large amounts would need to be eaten to cause illness in dogs.

MUSHROOM toxicity does occur in dogs and it can be fatal if certain species of mushrooms are eaten. Amanita phalloides is the most commonly reported severely toxic species of mushroom in the US but other Amanita species are toxic. Symptoms include Abdominal pain, drooling, liver damage, kidney damage, vomiting diarrhea, convusions, coma, death.

GRAPES/RAISINS as few as a handfull of raisins or grapes can make a dog ill; however, of the 10 cases reported to the ASPCA Animal Poison Control Center (APCC), each dog ingested between 9 ounces and 2 pounds of grapes or raisins. Symptoms include vomiting, diarrhea, abdominal pain, and lathargy.

MACADAMIA NUTS are another concern, along with most other kinds of nuts. Their high phosphorus content is said to possibly lead to bladder stones. Dogs develop a tremor of the skeletal muscles, and weakness or paralysis of the hindquarters. Affected dogs are often unable to rise and are distressed, usually panting. Sone affected dogs have swollen limbs and show pain when the limbs are manipulated.

BABY FOODS can contain onion powder, which can be toxic to dogs. Can also result in nutritional deficiences, if fed in large amounts.

BONES FROM FISH can cause obstruction or laceration of the digestive system.

CAT FOOD is generally too high in protein and fats.

FAT TRIMMINGS can cause pancreatitis.

“RAW” EGGS contain an enzyme called avidin, which decreases the absorption of biotin (a B vitamin). This can lead to skin and hair coat problems. Raw eggs may also contain Salmonella.

“RAW FISH” can result in a thiamine (a B vitamin) deficiency leading loss of appetite, seizures, and in severe cases, death. More common if raw fish is fed regularly.